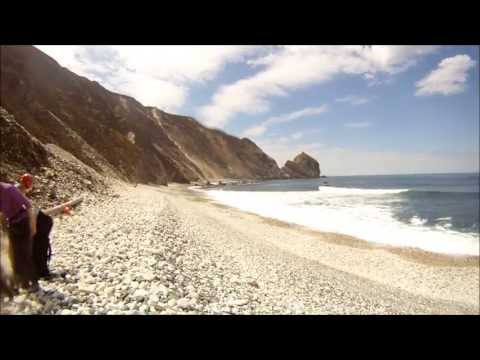 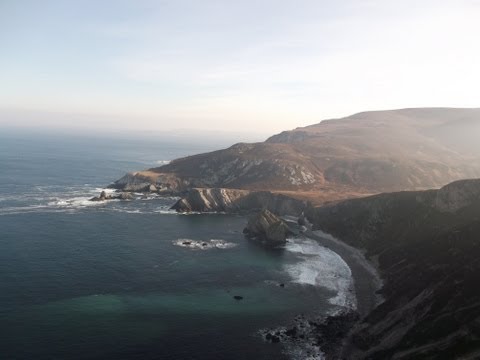 Sitting 3KM north east from the An Port road end is the huge Glenlough Bay. This bay stretches for 2KM from Tormore Island at it's southern end to the End's of the Earth Stack at it's northern end.  It contains one of the largest raised shingle storm beaches in Ireland and on a day of huge north west motion the roar of millions of tonnes of shingle being moved up and down the beach by the incoming seas can be deafening even from the clifftops 200m above the beach.

ACCESS: From the An Port road end follow the cliff top path North for approx 3 KM. Once you pass the Tormore viewpoint (Grid Reference G557906) continue to follow the cliff tops as they descend into Glenlough Bay. At Grid Reference G567904, descend to the wide gully immediately to the South of the large ominous looking buttress. Follow the stream down this gully until approx 70 metre above the sea, traverse north for 50 metres and descend the scree slope to the beach. (Directly below the ominous buttress)

The storm beach extends for over a KM and terminates at it's southern end in a wide Geo seperating Glenlough Bay from the Cobbler's Tower land mass. In this wide geo a pair of huge seals live, they have always been there everytime I have visited. They are extremely curious and will come to within a few feet of you before disappearing under the waves.

Living at the northern end of the beach are two sea stacks and a beach tower.

The Tent Stack is the 50m high, broad centre stack, it has boulder hop access at low to mid tide. Alas as the tide floods it creates a lot of white water around the landward face due to the many semi-submerged boulders. There are two recorded routes to the summit up the landward face both have a wee bit of jungle bashing involved. :-)

The 45m southern stack sits approx 80m out to sea and involves a wee sea passage to land on it's landward face. The easiest route to the summit is very loose with nearly 4m of good rock as you pull onto the summit.

The beach tower has an excellent route to it's summit ridge alas it is not easy and falling off would be fatal.

This bay is well worth a visit for all climbers, walkers and photographers.