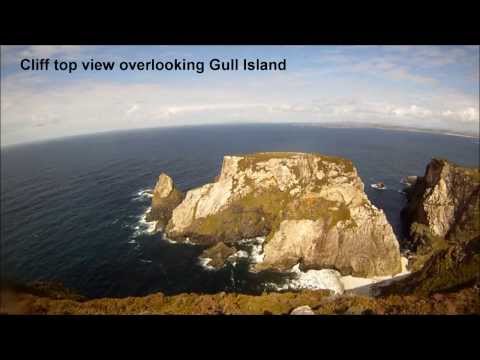 Gull Island is a huge sea stack sitting in the middle of a huge expanse of lonely, remote and uninhabited coastline. Stretching 12KM to the East and West of this stack is a wall of outrageous 300m sea cliffs, which effectively guard this coastline.

Soaring above you is an arete of biblical proportions leading to the massive summit of Gull Island. More route details in the Donegal sea stack guidebook.

The stack is climbed in three huge pitches up this landward arete. The first pitch could be call the death pitch as it is unprotected for it's first 40m but thankfully presents easy climbing. This takes you to a slabby flatening and a tri-peg belay. The following 100m of climbing takes you directly up the arete with an excellent mixure of big block scrambling, slabby crimping and jungle bashing.

The summit of Gull Island is a huge expanse of untouch and unspoilt wilderness with several birds of prey, many ground nesters and the odd rabbit/puffin burrow in attendance on this 100 square metre summit.